The Great British Write Off

Following the overdue departure of The Great British Bake Off to Channel 4 the BBC lost no time in approaching me to devise a suitable replacement to fill the gap in its weekday evening schedule. I decided it was an opportunity to raise the cultural standards at the ailing broadcaster, which have long been in decline, and developed a proposal for a literary contest- The Great British Write Off. The concept was an organic development of  my recent ideas for live writing festivals and will 'come as no surprise' to the thousands of cliché-loving fans of my blog.
National treasure Alan Bennet has agreed to fill the Mary Berry role, coaching a cohort of hopefuls through a series of gruelling televised literary exercises. The Paul Hollywood role is still open, as my exasperated production team has yet to find a sufficiently literate Scouser.

Posted by essay den sushing at 00:20 7 comments: Links to this post

Since a team under my direction first produced Buckminsterfullerene--a spherical molecule in which sixty atoms of carbon are arranged in a geodesic shape reminiscent of the domes of architect Buckminster Fuller--my crack researchers have discovered other wondrous arrangements of carbon atoms that showcase the endless inventiveness of mother nature.

Sirnormanfosterene is a gherkin-shaped arrangement of 928 carbon atoms found naturally in soot. 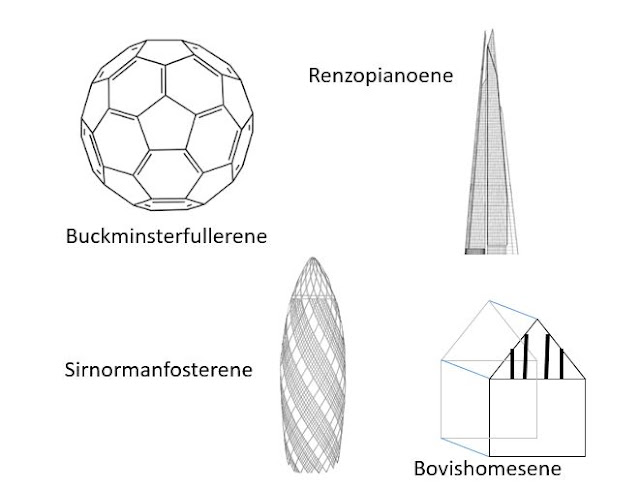 Renzopianoene is a tall molecule with a tapering square cross-section containing 2048 atoms of carbon. It does not occur naturally on Earth, as far as we know, and was created in my laboratories using laser deposition interferometry techniques.

However, the most remarkable carbon molecule we have encountered is bovishomesene,  a collection of fourteen atoms forming a cube surmounted by a triangular prism. Particularly strong co-valent bonds between p-shell electrons in the atoms at the 'gable' of the prism creates a stunning mock-Tudor effect. When Bovishomesene  molecules are amassed in significant quantities they assume a pseudo-crystalline formation known as an 'e-state', which mimics the principles of Penrose tiling with an extremely high packing density. Bovishomesene molecules- or 'bovvy boxes' as they are known in my labs- decay naturally over a period of ten to twenty years.
Posted by essay den sushing at 11:48 No comments: Links to this post

Found in a dustbin in New York, what appears to be the transcript of an interview between a ‘famous celebrity’ KK and theoretical physicist Stephen Hawking.

KK- You’re really famous, right, for inventing black holes. Black’s really cool, but couldn’t you have them in other colours, like a gold hole?
SH- No.
KK- That’s such a shame, Sweetness. I was thinking that since they absorb everything you could make a really cool make-up removal pad by impregnating a sponge with lots of tiny black holes, but if the sponge was covered in black dots it might look dirty.
SH- The tiny black holes would absorb the sponge too.
KK- But we could use a really stiff sponge, right? I was wondering how heavy a tiny black hole would be.
SH-Mini black holes small enough to pepper a pad for make-up removal purposes would  be around  six hundred million, million, million, million tons.
KK- Hmmm… that sounds a bit too heavy. But they wouldn’t be burning hot like the Sun?
SH- No, the surface temperature of a small black hole is around 0.0000000001 of a degree above absolute zero.
KK- That’s really cool. Presumably that explains why they are called black-holes, right? The Hawking radiation given off at that temperature would have a frequency of… let me see (pauses to perform mental arithmetic) about 1500hz, millions of times less than that of visible light?
SH- Yes.
KK- I wrote a rap song for you to listen to while you do your experiments on black holes, to help you concentrate. I’ll sing it for you. (Leaps to feet, strikes nearby tuning fork against chassis of the Professor’s mobility scooter, and hums a note)

How to calculate black hole entropy
And one thing we like that’s really ace
Are the worm holes he’s found deep in space
No wonder his eyes are tired and bleary
From nights spent tackling quantum theory
When you see his conclusions on a graph
They make the Higgs Boson look really naff
I think he’s so very wise
He should have won a Nobel Prize
Some say he’s a bit of a miser
For have such a cheap old synthesiser
That gives him that distinctive voice
But we know really it’s a fashion choice
He could have a new one that would make him
Sound more like lovely sexy Kim
But I could think of nothing worse
Than talking about the universe
So hats off to clever clogs Stephen Hawking
Who’s days and nights of blackboard chalking
Have helped us understand our place
In the continuum we call space
Time.


SH- I don’t do experiments. I’m a theoretical physicist.
KK - Didn’t you discover the Higgs Boson then?
SH (resentfully)- No.
KK – Is there going to be a Stephen Hawking Boson?
Posted by essay den sushing at 00:09 No comments: Links to this post

I received by post this morning a charming letter from a young lady named Sasha. I have learned in my physics class, she writes, that charge parity violations might account for the marked preponderance of matter over anti-matter in the observable universe- might an analogous process account for the preponderance of heroes over antiheroes in literature?
Indeed, I wrote on the very subject some years ago (see Sushing ED, Annal der Litereinschrifts,  Vol X11 Pages 213-409, July 1983). Any ex nihilo model of the emergence of literature must account for the imbalance of heroes to anti-heroes, and more generally novels to anti-novels. The proposals I submitted at Hay-on Wye in 2008 have been largely (and some would say wilfully) misunderstood by a too-conservative literary community. However, Vidal and others graciously acknowledged the validity of my ideas, which may be readily appreciated by anyone with a sufficiently open mind. Without considering the more complicated nuances of my argument, we may simply observe that dichotomous cognate meaning operates reflexively in any non-Brechtian verb-space. It follows- saper sunter- that the iterative operation of the reflexion through ablate normative perturbations will necessarily reduce objectivism, hence the asymmetry. Quite why such a simple theory has failed to penetrate the minds of the so-called literary academics, I will leave you to decide, but the words ‘stony ground’ spring to mind.
Do I speak bitterly? Perhaps- but can you blame me?
Posted by essay den sushing at 03:40 5 comments: Links to this post

You find me this morning in a nostalgic mood, one prompted by news from the White House that the simple mansion in which I was raised is to be made a US National Monument.
The announcement honours my role as the progenitor of the US civil wrights movement which transformed the conduct of skilled manual workers in the 1950s.  Few now can remember the days in which my movement was formed, days in which it was not possible to walk from one end of a craft-village to the other without the cussing of curmudgeonly wrights bringing a wine-hued blush to one's cheek.
Upon its launch the movement was greeted by characteristically impolite catcalls from the artisan community, but I was undaunted. March after march, impassioned speech after impassioned speech, I laboured for a cause I knew to be wright, sorry, right.
Hitting new oratorical heights with my ‘I have a dream’ address in Bettysburg- an address that had old and young alike in tears at my vision of a manufactory world free of incivilities-  I stood foursquare against the combined enmities of a nation’s artificers, braving all to ensure that one day we would be…


(… is wheeled away by nurses.)
Posted by essay den sushing at 01:57 No comments: Links to this post

Creative Writing- What Next?

The term 'creative writing' was coined in 1963, so we ought to find something fresh to replace it as a focus for post-modern literary development. What about its logical complement, 'destructive writing'? How might one establish a school of destructive writing? What would be the tenets of such an abstract body? Would it suffice for work to be uncreative or would it have to destroy established literary ideas to qualify as 'destructive'? Would destructive writing have a finite scope, ending when all literary ideas had been destroyed? Or could the movement evolve and progress beyond the literary vacuum into the realm of anti-writing and the production of anti-novels?

These questions, and others, I must leave a puzzled literary world to resolve, as I need to lock-up the chickens for the night before the fox gets them.

Posted by essay den sushing at 04:01 6 comments: Links to this post

CAMEL- the Campaign for More Editing in Literature

Do poorly produced books give you the hump? Join CAMEL- the Campaign for More Editing in Literature. Launched today, CAMEL seeks to rid a tortured humanity of the phenomenon of the over-hyped, under-edited bestseller riddled with short-comings.


How often have you had this experience…

You stand in a bookshop, desperate for something decent to read. Arrayed on a table is a collection of the bookseller’s latest offerings, the pick, one assumes, of the current literary crop. No matter which you choose, its blurb describes in golden phrases the book it adorns. You trust the words on the cover. Clutching your selection you walk to the checkout, an addict needing a fix. Money is paid: the book is yours. You take your seat on a crowded train. Ignoring your sullen fellow- passengers you retreat into your private world of literary appreciation, turning the pristine pages of your purchase. And then, they hit you- breaking through your willingly suspended disbelief come the cliché, the pleonasm, the syntactical gaffe, the gratuitously invented irrelevant detail, the misplaced exposition, the inapt simile, the indistinguishable characters, pronoun confusion, pedestrian prose, and every other type of verbal pestilence. Confused, you turn to the back cover. Yes it did proclaim ‘a startling literary talent’, ‘hugely accomplished’, and half-a-dozen other accolades, all of them, as you now realize, entirely misleading.


Why should a betrayed reading public suffer such injustice? Don’t let the publishers get away with it. Shame them, now. Using the comment box below, give your nomination for a book deserving the full five humps.
Posted by essay den sushing at 14:13 13 comments: Links to this post

essay den sushing
'Smart alec.' Gore Vidal
'I'd say I owe him everything, but he made me promise never to mention my dealings with him.' Jeremy Clarkson.
'Shallow, meaningless, and puerile in parts; the rest is indescribably bad.' Stephen Fry.
'I owe him everything.' Steve Jobs.
'The finest literary mined of our generation.' Dan Brown.

Mentor to Obama and Putin, polymath, yogi, unwilling strategist of the Bank of England, unwitting inventor of the retina display and the I-phone, creator of the Sushing scale of celebrity, inventor of XLML (eXstensible Literary Mark-up Language) and the 'Snap-lock' golf system, father of Didactic Gradualism, Chair of the IOKCC Organising Committee, patron of the EDSRF, champion of the Frack- it-Yourself (FIY) movement, product reviewer, scientist, literary giant, scourge of the BBC, tireless campaigner for women's rights, guru, savant... (Readers- OK that's enough. We get the picture).